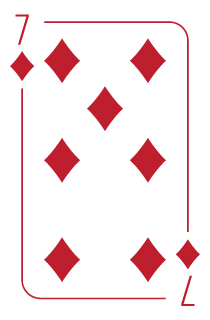 How to Read the 7 of Diamonds:

The 7 of Diamonds is traditionally a card of financial achievement, rewards and recognition.  Based on the more unfavorable symbolic meanings of the number 7, this card can also indicate financial challenges and feelings of stress over money.

The 7♦ is the card of success and achievement, and denotes being rewarded or recognized for your efforts.  This is also a money card, and can indicate improved financial prospects, and an increase in income such as a raise in pay on your regular job, or a significant sum of unearned cash.  The 7♦ can also denote “lucky money,” and can represent gambling wins, or losses (if surrounded by spades).

The 7♦ indicates “wise investments.” This card represents a person’s liquid assets, and the surrounding cards will describe the current financial state, and any actions to be taken with the money in the way of investments, or large purchases such as a car or home.  Once the money is invested, it is usually represented by the 10♦.

Two 7s: signify life changes. With the 7 of Spades it can be a change for the worse. Two red 7s indicate health and happiness.