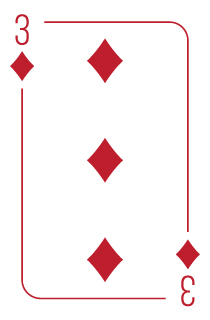 How to Read the 3 of Diamonds:

The number 3 symbolizes growth and expansion, and when combined with the Suit of Diamonds, the 3 of Diamonds represents a small increase in money, financial growth, and taking the first steps on the ladder to success.

The 3 of Diamonds is a “small money” card. It can indicate increased income, or extra money coming in from an outside source such as a side job, moonlighting, or overtime hours.

The 3♦ also represents building toward financial security. It can indicate expanding one’s business or clientele base, and an increase in profits.

I read the 3♦ as “a financial opportunity” which covers anything from a new job offer to a chance to get in on the ground floor of the next big “get rich quick’ pyramid scheme. It can indicate a lucrative side job, a small promotion on your current job, or even just a small raise in pay.

The 3♦ can also indicate “financial expansion.” This might include expanding a business base, or actually breaking down walls and expanding the business space.

The idea of expansion represented by the number 3, combined with the nervous energy of the Suit of Diamonds, can represent “scattered energy.”  The 3♦ can denote a lack of focus, commitment, or effort.  In relationship readings, this card can  indicate “fickleness” or changeability in a lover who runs hot and cold.

Two 3s: a church or monastery.

Face Card + 3♦ = someone with good financial sense, or a clever idea for making money.