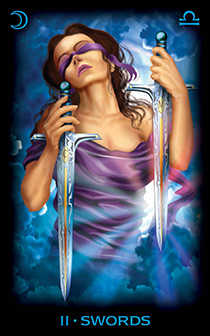 Key Meanings: Time to think and a stalemate

The Two of Swords in Tarot stands for blocked emotions, avoidance, and stalemate. The Two of Swords meaning in a Tarot reading is one of balancing hard choices and making difficult decisions. The card symbolizes the woman’s struggle to keep her feelings within herself and fending off outside approaches.

Upright Meaning: The Two of Swords shows thinking time before a decision. A situation has reached a stalemate, so you can view this period as a truce or a rest before further negotiation. The tendency is to protect yourself, have a little peace, and not take action. Unfortunately, this upcoming battle may not go away; resolve it now and it’s done. Otherwise, the situation festers and may return.

As there are two swords on the card, this Two can reveal a person you cross swords with. It’s likely that your difficult person is sharp-tongued, but don’t be afraid of a lashing: Stand your ground and say what you think.

The card commonly comes up in readings to show employment issues and also time out in relationships. This may be circumstantial, due to partners living in different places; if negative cards such as the Three of Swords or Lovers reversed appears with the Two of Swords, it shows making a decision about the future of a relationship.

Whatever your experience of the Two of Swords, help is at hand in the form of supportive friends and colleagues. Listen to advice and then take the best practical steps forward.

Reversed Meaning: When reversed, the traditional meaning of the Two of Swords is deception and being blind to someone’s manipulation. This card applies particularly to partnerships—love, friendships, and in business and your career. If you intuition is telling you that someone is dishonest, pay attention and carry out your own detailed investigation to get to the heart of the matter. There is an opportunity here to act, but the timing is sensitive; the message is not to delay.