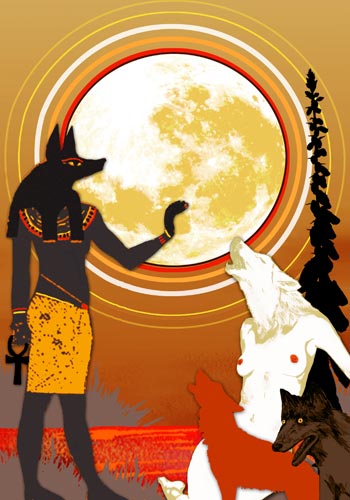 The Full Moon on June 23 at 2º Capricorn is classed as a super moon. This occurs when the Moon is at its closest position to the earth in a year. When it coincides with a Full Moon, like this one, it will display in the sky as unusually large and bright. Astrologically this Full Moon doesn’t disappoint either, for it forms a fantastic Kite aspect pattern in the sky with the Sun, Black Moon Lilith and Jupiter in a stellium at its tail.

Black Moon Lilith conjunct Jupiter has been on and off since late 2011 and we are moving to its final exact conjunction on July 12. The next 6 weeks will bring Lilith themes to the fore because this conjunction will also be active at the next New Moon, tightening the grand trine with Saturn trine Neptune. We have already seen some of the most negative Lilith themes in the news over the past year. The Delhi Rape Case and the Jimmy Saville Paedophilia Cover Up scandal at the BBC in Britain to name just a couple.

I hope personally that some headway will be made in highlighting the importance of the divine feminine within the collective. This super moon has the potential to awaken us as to how all established world religions cannot bring enlightenment while the female is still regarded as a less spiritual vessel than the male. I have to quote the Dalai Lama on a possible female successor. “If the circumstances are such that a female Dalai Lama is more useful, then automatically a female Dalai Lama will come,” but then goes on to say that if “one female comes then must be very attractive female. So the very reason, you see more influence to others, an ugly female then may not much effective,” Is that a joke or what?

This Full Moon forms the backbone of the tremendous Kite then and the stars that are being activated are extremely potent. Jupiter & Lilith on Betelgeuse, Neptune on Fomalhaut and Saturn on Gacrux, the April Lunar Eclipse degree. I called that eclipse Spirit Matters; “When you overlay conventional religion on top of the myths and astrology, you can see clearly there is a common theme running through all the myths and religions on earth. Could the Lunar eclipse could bring some unity between religions?” Well, right now the only unity I can see is that all the heads of the established world religions are male. So we have this potent grand water trine. Two, out of the three stars are extremely spiritual and Neptunian. Betelgeuse added makes this a spiritual warrior. Lilith conjunct Jupiter makes this…. Joan Of Arc? Wow.

Ordinarily grand trines can promise much, but fail to deliver; Much depends on the planets involved. But I do have high hopes for this one. Since the Sun, Lilith, Jupiter stellium it such “Oomph”. Full Moons are about relationships, where the Moon Goddess meets receives the Sun Gods rays and they unite in illumination. I love the fact we have the union of opposites here with Saturn and Neptune too. They represent earth and water, the fundamentals of life, Saturn rock solid reality harmonising with Neptune’s trans-dimensional mist. This is an ongoing trine, but the Full Moon should trigger its potential to bring about some sort of inner marriage between the male and the female in all of us. I think this Super Moon has the power to balance right and left-brain. Enlightenment.
Full Moon June 2013 Aspects
The Moon is heavily aspected due it being in the Kite aspect pattern:

Moon opposite Jupiter “has a huge appetite, not just for edible things but also for love, money or success.” It may inflate and exaggerate emotions and also can easily make the opposition its shadow. In this case we almost have a Hades Moon with a wide Moon conjunct Pluto which “is penetrating, provocative and plunges headlong into the dark sea of lunar emotions without fear. They want nothing less than dramatic and intense sexual relationships that profoundly transform their souls.” This is a very female tantric shadow to oppose such a heroic Betel-geused up Sun.

Then we have the sextiles of the Kite. Moon sextile Neptune “takes the fantasy element of Neptune and tries to build a utopia. There is a real element of a budding saviour quality about it. This aspect is in tune with the common peoples hope and dreams. The nurturing side of the moon can take on a transpersonal role in mothering the world.” The saviour of Joan Of Arc comes up strong again here. We have then a strong compassionate and protective female being boosted by Jupiter on Betelgeuse. “great honor in the Church or law.” Moon sextile Saturn gives this even more stamina and force.

Finally we have Moon Opposite Lilith “Because the Moon and the Black Moon are such polar opposites, in an opposition they could actually end up cancelling each other out. A successful balance of these two would mean that the domestic moon can restrain Lilith from going too far off the rails and lusty Lilith could break some of the moons stagnating habits.” Putting this all together, I think we have a great opportunity for some spiritual levelling out. Saturn tempers Neptune, Lilith tempers the Moon and finally Sun/Jupiter tempers Moon/Pluto. All this in a grand water trine and a Super Moon to boot. Does the super moon have any extra astrological potency? We shall have to see, but I just think it’s very apt that the physical reality of this Moon is complimented by the astrological symbolism of super giants Betelgeuse and Jupiter.

This Super Moon may feel as strong as an eclipse, but with the energy concentrated over two weeks. We shall have to keep an eye on the news and see what stories come out. Unlike an eclipse though, it doesn’t give us anything to be afraid of. It might make people behave even more “loony” than your average Full Moon however. I think emotionally we may feel very euphoric, even blissful and be subject to a little midsummer madness. I also think intuition will be super high, but the grounding of Saturn will prevent us feeling overwhelmed, ultra-sensitive and invaded. This is then an ideal opportunity then to practise manifestation rituals, healing and magic. If you are a creative then the muses will be out in full force. Some profound and beautiful poetry will be written over these two weeks. Be sure to go out at stare at this wondrous Moon and if you are daring enough, go sky clad. Of course it will all be intensely romantic. Enjoy!