“Less concrete phenomena, such as time, are also dependently arising…If one were to remove any one of the component moments, the whole would be unable to exist. The mind too has no independent existance. Any one state of mind depends upon numerous moments of consciousness and various mental factors…The beginningless and endless stream of consciousness that passes from one life to another and finally reaches buddhahood is not independently existent either. It is in a constant state of momentary change and thus depends upon the infinite number of moments that constitute its continuity.”

– Geshe Rabten in ‘Echoes of Voidness’ 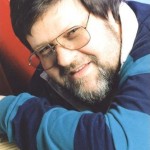 Taeger grew up in West – Berlin (-on his Sun – Ascendent line). As a child he had many extraordinary mystical and magical experiences (-see psychedelic biography). Later at school he developed strong ambitions for biology, art and avantgarde – literature, followed by studies of literature, history of art, psychology, sociology and mass media (- film history) at the universities of Berlin and Münster (1964-1972). 1961 he made his first experiences with psychedelics and ‘altered states of consciousness’. In spring 1968 he moved to Muenster / Westphalia (-to his Mercury – Ascendent line) where he lived in a countryside cottage until early 1984. At this time he also worked as a freelance journalist (feuilleton, film, TV) and – inspired by a trip to San Francisco (summer 1966) – he became enthusiasticly engaged in the psychedelic movement of the sixties and seventies and organized various Happenings and “Love-In’s” in Germany.

An additional influence of those days where the intensive contacts to the ‘Living Theatre’ company (J. Beck, J. Malina) – being in Berlin for more than a year – absorbing their great hippie – spirit and spirituality. This intensive, colourful and creative time, intensified by many Pluto – transits in virgo and libra, was the “melting pot” from which Taeger got his most impulses, deep insights and peak experiences: keys to his richly aspected 12th house. At the same time (1965 – 1968) he also published alternative literature ( “studio presse hans taeger”) and edited the magazine “pro these”.

In 1970 he began collecting astrological data (the later “TAEGERARCHIVES” ), decided to become a ‘professional hobby astrologer’ (- which he is still today) and founded “ASTROENERGETICS”, a vital combination of astrology, science, depth psychology and eastern esoterics. Between 1970 – 80 he developed his own astrological methods like the ‘Mandala – Energy – Analysis’ (extensive and basic analysis of a chart), ‘holograms’ (computation of total midpoints of all natal factors) and ‘rhythmograms’ (house progressions of various rhythm in a graphical printout). Since 1970 he also introduced modern unorthodox teaching methods like astrodrama (- including group dynamics, music, art, dance, meditation etc.) and created the word ‘Karmagram’ instead of horoscope.

In October 1975 Taeger was encouraged by Lama Th. Yeshe, Geshe Rabten and later by Tenga Tulku to establish the astrological and Buddhist school “MANJUSHRI – MANDALA /Friends of New Age Buddhism”as an experiment, bringing together western astrology with the basics of Buddhism. Later integrated in the “INSTITUTE FOR ASTROENERGETIC STUDIES” (IAS), which was transformed into a more research orientated institute on 1. 1. 1988, 0:00 WET, Portsalon, Co. Donegal/IRL (co-director: Thomas Siegfried). Between 1970 – 83 Taeger gave more than 150 weekend- and holiday workshops for more than 2,500 students, guided several meditation retreats and worked also as a Buddhist teacher. In 1983 25 students passed his examinations (-written self – analysis, a scientific astrological study, basic understanding of Buddhism, oral examination) and became certified “Astroenergetic Counsellors / IAS”.

Taeger is practising Buddhism since 1974 (-first contact with Tibetan Buddhism in 1962 by an older friend who travelled Tibet as a silk merchant in the Thirties and early Fourties). Between 1978 – 1982 he developed the concept of the ‘ASTRO – BRAIN’ computer software, which features all of Taeger’s astrological methods. A modern version is under development. Several world-trips (USA, Canada, Australia, India). In 1978 he became a certified astrologer of the ‘Deutscher Astrologen Verband / DAV’. Between 1979 – 81 Taeger made a 2-year meditation retreat in the tradition of Tibetan Vajrayana – Buddhism under guidance of his teacher TENGA TULKU.

Due to more intensive astrological and esoteric studies he gave up his career as a teacher and counsellor and (-after a long worldwide search for the right spot) settled in County Donegal, Ireland, where he lives as a permanent resident since 19. 3. 1984, 21:00 WET in Portsalon (-on his Saturn – MC and Neptune – Ascendent line). In the last years he and his life partner THOMAS SIEGFRIED (Champa Pelgye) (*29. 5. 1956, 14:15 MET, Kaiserslautern/D) – whom he met on the 11. 4. 1982, 22:10 IST in Dharmsala/IND – as well as some of his former students and collaborators (e.g. Ulla Janascheck, Michael Lohmann, Peter Ruether, Eckhardt Schmidt, Harald Schmiedle, Tobias Ferber, Max Baltin) worked in the fields of astrological research, data collection and Buddhist studies. In 1997 the TAEGER – ARCHIVES contained more than 24,000 well researched data (personal data as well as mundane data). The archives are continously updated and enlarged. In his Irish retreat Taeger also found time for writing books, articles and to deepen his understanding of Buddhism. Several publications appeared in Germany and other countries. Subjects: Astrology, Buddhism, New Age.