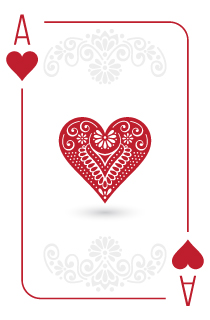 How to Read the Ace of  Hearts:

Traditionally the Ace of Hearts is a card of love. happiness and celebrations.  As an Ace and Heart, this card can indicate a new love, or the beginning of an emotional period in the querent’s life.

The number 1 symbolizes the beginning, or source.  When combined with the suit of hearts, it denotes the source of one’s emotional support which in most cases is the home and the family.   The Ace of Hearts can refer to the actual building in which one resides, or it can denote the idea of feeling comfortable and “at home.”

The A♥ can represent a change of residence, or a return home after being away for a period of time.  The A♥ can refer to real estate and the sale or purchase of a home.  The  A♥ can also represent a specific family member, or one’s family in general.

My grandmother called the A♥ “Casa” which means “house” or “home” in Italian.  For her this card would denote wherever a person held residence.  It could be a house, an apartment, a hotel, or even a car if that was where the individual called “home.”  The surrounding card would reveal the current situation in the home, and any problems or changes affecting that area of the querent’s life.

The A♥ is also a card of protection. I can remember my grandmother sliding an Ace of Hearts inside the frame behind a picture before she hung it on the wall. She believed the Ace would protect and bring luck to the home.

Card Combinations with the Ace of Hearts:

A♥ + Face Card =  someone coming to the home, or someone who is home and family oriented.  The A♥ with the K♣ it would denote a builder or contractor. With a group of Face cards, the A♥ would represent a family reunion, or a family celebration.