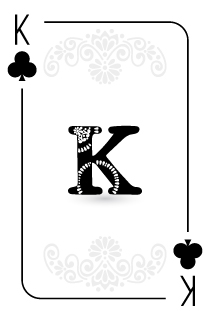 How to Read the King of Clubs:

Traditionally, the King of Clubs represents a male of medium coloring with medium to dark brown hair and brown, blue or hazel eyes. He is a reliable friend and trusted adviser.  The King of Clubs is generally a married man.

The King of Clubs is a generous, enthusiastic, socially active man of authority. He has excellent business sense, and may own his own business.  He might be a successful entrepreneur, a business executive, a college professor, or a professional athlete.  He could be a male colleague or business associate. He could be the seeker’s boss or best friend.

My Grandmother called the King of Clubs “The Married Businessman,“  and “business” didn’t always refer only to commerce.  It could also represent “hanky-panky.”  When a female seeker is involved with a married man, he is often represented by the King of Clubs.