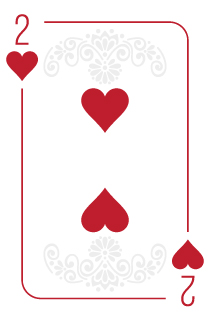 How to Read the 2 of Hearts:

Traditionally, the 2 of Hearts  is a card of love and affection.  Based on the meanings of the number 2, and the suit of Hearts, this card can represent loving exchanges, and can indicate a love letter, or good news from or about a loved one.

The 2 of Hearts can also indicate affection between two people.  This card can denote a romantic relationship, but because it is a small Heart, it most often refers to a strong platonic or filial bond.  This card can indicate compatibility with someone or something.

The 2♥ can be read as the seeker’s emotions.  My grandmother called this card “L’Attesa,” which means “anticipation,” or “expectancy” in Italian.   Specifically this card denotes emotional excitement and expectancy.  The cards surrounding the 2♥ will describe what is expected, or what the seeker is looking forward to.  This card foretells that something new and exciting is about manifest in the seeker’s life.

The idea of “expectancy” can also refer to a pregnancy.  As such, the 2♥ can also represent a baby, a child, or children in general.

The 2♥ is also a highly creative card.  It represents the creative power that is channeled through artists and musicians, and can denote a talent for art or music.

According to older cartomancy meanings, the 2♥ indicated that an unexpected visitor would appear within two weeks.  Hence, the 2♥  is traditionally a card of time.  It can indicate that a prediction will occur in 2 days, 2 weeks, 2 months, or 2 years.

Twos in multiples can mean double the fun or double the trouble. They can represent things coming in twos–couples, twins, socks, shoes, etc.