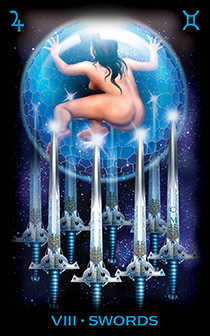 The Eight of Swords in Tarot stands for restriction, confusion, and powerlessness. The woman on the card is blindfolded, tightly bound, and caught in a prison formed by the surrounding swords. She is unaware of where her security lies.

The upright card shows feeling trapped. This may be due to a series of bad experiences and poor luck, and you begin to wonder if things can ever improve. You may be anxious due to an unsatisfactory bond with an individual or an organization; specifically, you may be trapped by a credit agreement that leaves you little money for yourself.

This unfortunate Eight of Swords commonly reveals problems in careers and the intellectual or mental realm, showing frustration and, at its most extreme, panic. Hemmed in and unhappy, you may be finding it impossible to do your work to your satisfaction due to unreasonable demands or disorganized management. Also, there may be a sense of conversations going on behind closed doors that you are not party to, so you feel isolated and even vulnerable. The card commonly arises in readings to show someone who is in a role that doesn’t suit them, but they are under pressure to conform—such as working in the family business or taking a course because it will lead to a profession, although it isn’t what they love doing at all. Many creatives and lightworkers go through this experience of not fitting in, but it takes time and confidence to find your path. You can release yourself from these bonds, but it will take determination, and you may need to swallow your pride and ask others for support and advice. On a social level, the Eight of Swords can show you feeling humiliated or ignored, and you fear others’ attitudes toward you.

An additional meaning of the card is illness and incapacity. Again, this does not imply permanent disability, but a phase of physical restriction.

Reversed Meaning: In the reversed position, much of the upright meaning applies, except that it is often accompanied by strong emotions such as guilt, anger, and regret. It’s likely you’ll express these feelings in negative ways, however, because you are so frustrated; try not to lash out on whoever is closest. As with all the minor arcana cards, the Eight of Swords shows a phase that will not last.