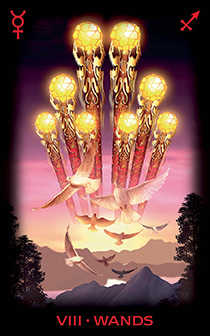 Upright Meaning: Along with the Ace, the Eight of Wands is one of the most positive cards of the suit. It brings lots of communication, so you may be inundated with emails, calls, and exciting offers. If you have felt held back, or stuck waiting for decisions, you will soon have positive news. All your projects grow wings, moving swiftly forward. Just be prepared for the shift; fast, frantic events will energize you, but you will also need to prioritize any offers. Don’t feel you have to say yes to everything. Choose wisely and enjoy this frenetic, exciting influence.

In relationships, the Eight of Wands can bring great news about love, particularly if you have been separated from a partner recently or are waiting to hear from a potential partner. You may be traveling soon to see one another.

Additionally, the card has often come up in readings to show the professions of carpentry and scaffolding—work that involves using or building a framework.

Reversed Meaning: When reversed, the simple meaning of the card is delay. You may have lots of pending work to finish and may be waiting for a particular decision that will unblock other ambitions, but just for now, you’ll need to be patient. It’s also important to be discreet about any grievances you have just now.

In relationships, you may be finding it hard to communicate and as a result be drawn into petty arguments. If you have hopes for a new love, you may be feeling disappointed by the person’s lack of contact. Look to the surrounding cards for indictors as to what this means; negative cards such as the Three or Ten of Swords or The Lovers reversed suggest that this potential relationship may not get off the ground. More positive cards, such as the upright Lovers or the Ace, Two, Six, Nine, or Ten of Cups, say that there is still hope you’ll connect again.

An additional meaning of the reversed card is jealousy.