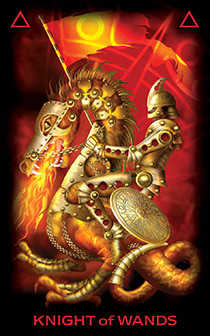 The Knight of Wands in Tarot stands for being charming (superficial), self-confident (cocky), daring (foolhardy), adventurous (restless), and passionate (hot-tempered). Where on the one hand, the Knight of Wands is full of energy and never seems to be afraid to try new things. On the other hand, he seems too sure of himself and his abilities. Although others may be baffled by his crazy stunts, his courage and passion are still admired. The Knight of Wands tends to be shallow, and one can’t expect deep commitment from him. He is reckless and irresponsible and acts without thinking. This gets him into trouble. The Knight of Wands also delivers spiritual messages.

As an influence: Events speed up. Any blocks to progress will be lifted, so this is a welcome card if you have been waiting for decisions or have generally been feeling stuck. You can now have the conversations and action you need to move your projects on; follow your intuition and push forward. This card is particularly auspicious for moving house, finding new work, and making progress on personal and professional projects.

In readings, this Knight often appears to predict a successful writing project. In other creative pursuits, you attract acknowledgment and support, both emotionally and financially.

An additional meaning of the card is travel and emigration.

As a person: Creative and dynamic, the Knight of Wands is an innovator and likes to do things his way. He inspires those around him and is excellent at networking to promote his ideas. He may be a traveler or visitor, and he will have had many experiences and stories to tell. He is, however, impatient to get things done and can make snap judgments about people based on first impressions. As a potential partner, he can show a charismatic, talkative individual who may take things a little too fast at first.

Reversed Meaning: In general, the reversed Knight of Wands reveals a creative block or miscommunication—so emails go astray and other messages are not delivered. The reversed Knight also indicates delays and deferred decisions; you may feel frustrated at the lack of progress. Know that this influence is temporary and will pass. In the meantime, hold fast to your plans and your self-belief.

As a person, the reversed Knight is egotistical. He thrives on status but is generally unwilling to do any hard work to deserve it; regardless, he will step up to take the credit. Insincere and attention-seeking, he acts out of self-interest.