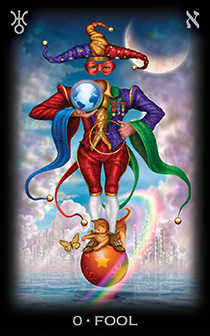 ​Alternative Names: The Jester, The Idiot

The Fool card in Tarot symbolizes new beginnings. The basic meaning of the card is that the Fool is on his way to a new beginning, and he has all he needs or wants as indicated by the bag on the staff. The Fool is shown in colorful clothes with a pack tied to his staff, a dog at his heels, and a cliff. The Tarot story of the Fool is that he travels aimlessly with all his worldly possessions. A daydreamer lost in his thoughts, he does not see the cliff and is likely to fall over. The dog at his heels tries to warn him.

Upright Meaning: When The Fool appears in a reading, depending on its position in the layout, it symbolizes someone who is about to embark on a new way of life. This may involve a physical journey, moving to a new place, starting a new job, or getting married or divorced. Often, the appearance of The Fool indicates a person who is ready to start on a spiritual path, who has made peace with the need to experience absolute faith and trust in the universe. In such a case, the person has no sense of worry or fear and feels that she is protected and that everything will turn out well. The person may be consciously in touch with the intuitive realm of his or her being, or he or she may simply be naive about what the future will bring. The Fool represents a state of openness and faith that he’ll be supported in his adventure.

Reversed Meaning: Is what you’re proposing—or a situation offered to you—a leap too far? The Fool reversed brings out his irresponsible side, as his mouth works ahead of his brain. Without thinking through the downsides, the Fool makes decisions that are not wise. The reversed Fool leaps without awareness and so becomes the literal idiot, sabotaging his chances due to desperation and irrationality. Think carefully before agreeing a new approach to work and hold back from emotional commitments until you are sure of your ground.