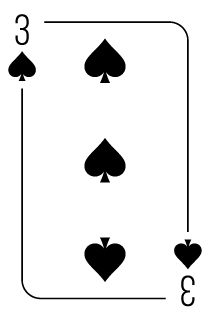 How to Read the 3 of Spades:

Traditionally, he 3 of Spades is a card of “loss.”  The number 3 symbolizes expansion and growth, and when influenced by the suit of spades, it can represent a growing problem, or a worsening situation. Conversely, this card can also signify interrupted growth, or a blockage.

My grandmother called the 3♠ “La Suocera” which has two not so different meanings in Italian: “The Mother-in-Law” and “The Funny Bone.” She would say that both meanings apply to this card. Like the proverbial mother-in-law, the 3♠ can indicate a troublesome, meddling person who is interfering in someone else’s personal business.  And like a sharp whack to the funny bone (or a meddlesome mother-in-law for that matter), the 3♠ can also indicate a particularly tender matter or situation-like a “sore point” in the querent’s life. This card can indicate that the querent or someone around the querent is “touchy” or defensive about someone or something. The 3♠ can also refer to “a third wheel,” and in matters of the heart it can represent the “mistress” or the “rake” in a love triangle.

You may remember an old song from the 1970′s by Cher called “Dark Lady.” If you don’t know it, the song is about a woman who goes to a gypsy fortune teller only to learn that she, her husband, and the gypsy woman are caught in a love triangle. When the gypsy lays down the cards, the lyrics to the song are:

“She dealt two cards, a queen and a three And mumbled some words That were so strange to me Then she turned up a two-eyed jack My eyes saw red but the card Still stayed black She said the man you love is secretly true To someone else who is very close to you”

I’ve always been sure that the three she dealt with the queen was the 3 of Spades.  The two-eyed Jack was undoubtedly the Jack of Clubs since he’s the only black Jack with both eyes visible.  In some of the older Cartomancy systems, the Jack of Clubs has a reputation for being insincere, and having a smooth line ladies.

A♥ +3♠ = A growing problem in the home that may be caused by a meddlesome person.