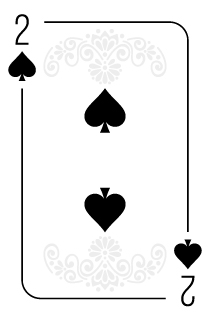 How to Read the 2 of Spades:

Traditionally the 2 of Spades represents a restriction or “feeling stuck,” and a removal or separation necessary to move forward.  All 2′s bring news, and with the 2 of Spades it’s usually bad news.

The number 2 symbolizes exchanges, and when influenced by the Suit of Spades, it denotes conflict, betrayal, violent arguments, misunderstandings, and malicious gossip.

The 2 of Spades can represent guilt, suppressed anger, feelings of resentment, and “holding a grudge.” It can denote vindictiveness, or harmful retaliation for any real or imagined slight.

My grandmother called this card “La Spaggadura,” which means “rift” or “break” in Italian dialect.   The number 2 symbolizes agreements, compatibility and partnerships, but with the influence of the Suit of Spades, the 2♠ represents disagreements, incompatibility, and broken partnerships.

The 2♠ can indicate a break up, or losing touch with someone.  It can denote leaving a job, getting rid of a car, or spending a large sum of money and feeling guilty about it. The separation can be of a temporary or permanent nature based on the circumstances and the surrounding cards.

Twos in multiples can mean double the fun or double the trouble. They can represent things coming in twos–couples, twins, socks, shoes, etc.

Three 2s: Can indicate lots of activity and everything happening at once.

4♥ +  2♠ = a marital separation or the dissolution of a partnership.