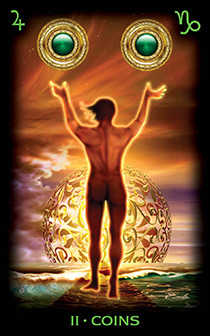 The Two of Coins in Tarot stands for flexibility, fun, and juggling. The Two of Coins meaning in a Tarot reading is high energy. The card symbolizes fun and good times, but be careful of over-stimulation. The figure on the card is a young man juggling and dancing simultaneously. The two pentacles within the loop of infinity indicate that he can handle all problems and juggle his worldly concerns away. He can easily control the ups and downs of his life as symbolized by the two ships riding the waves in the background.

Upright Meaning: In the upright position, the card shows making a decision and in particular, managing money. There may be temporary cash-flow issues, and you’ll need consistent effort to balance the books. If your income is up and down, an unexpected expenditure can hit hard; this is a common card for freelancers whose income varies from month to month, as well as for two people in business together. On a more positive note, the card says that if you pay close attention to financial and property matters, you will manage well, even on a tight budget. As a personality trait in the person/situation position in a spread, the Two of Pentacles indicates fairness and a willingness to find a good balance between work and personal life.

In readings, the card often comes up to show two properties and sometimes making a decision about where to live—in particular, a choice between home and a property abroad. This may also reveal a choice between two jobs in different places and weighing the pros and cons of each offer.

An additional meaning is news that comes in writing, so you may receive an important letter or email.

Reversed Meaning: In the reversed position, egotism and pride can get in the way of practicality. Irresponsible spending may cause hardship, and these financial mistakes may be hidden—gambling is a common meaning here, as well as a generally reckless attitude toward money.

In work, you may be dealing with an unreasonable boss who is unrealistic about what can be achieved, putting you under needless pressure.

The card can also show the ending of a business partnership due to financial difficulties; one of you may be investing more resources into the business than the other. The message is to observe closely just how committed you and your colleagues are and if the contribution is fair and equal.