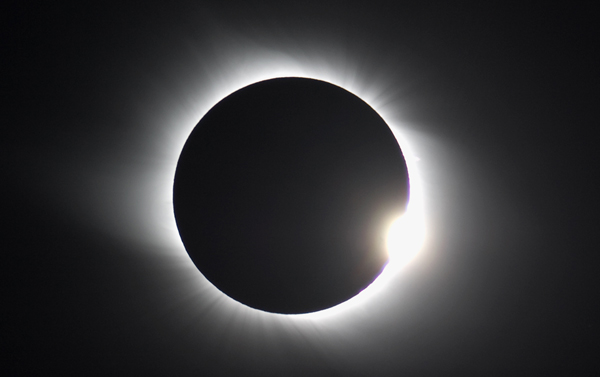 The Moon is waning (diminishing) now until March 20th, for a winding down cycle that is also a lead-in to an eclipse at 29 Pisces. The last sign Pisces is one of overpowering currents that lead us into all kinds of waters. It’s a time to drink deeply at the well of spirit, before the wild forward motion kicks in with the Spring Equinox. Savor the moment!

Eclipses are extraordinary passages of the year.  The Moon crosses the path of the Sun (the ecliptic) usually four times a year.  And when it does, from our earthly vantage point, it appears the Sun and Moon align with the home planet.

Eclipses are like peak scenes in the story of the year, with some effects lasting for months afterwards.  They arrive in pairs (sometimes trios) for an extended time of catalyst-type events.

Look for the degree of the Zodiac sign in your own birth chart that’s charged-up by the eclipse.  That gives you clues as to what’s up for accelerated change or an event.

Here are the Eclipse dates for 2015 with some notes on the energies:

Worn-out beliefs and stories circle the drain, for this “go with the cosmic flow” Dark Moon.  It’s one for endings, as it’s the very last degree of the last Zodiac sign.  What or who haunts you?  It’s time to relinquish the energetic impedimenta from the past, and find closure.  The eclipse is at 5:36 AM EDT.

The timing is meaningful, on the edge of Spring and newness.  Here though, we rest in the timeless moment, and give over to the greater wash and tide that will renew our spirits.  Pisces in the anaretic – or master – degree – shows us how to let go with courage, to prepare for what’s ahead.

Those with late degree mutable sign energies (24 to 29 degrees of Gemini, Virgo, Sagittarius and Pisces) will be in the zone of big change.  Early degree cardinal signs (0 to 4 Aries, Cancer, Libra and Capricorn) are also near to the transformational charge.

The shadow falls on the Libra Moon here and the Sun is in bright Aries.  The Sun is said to be a natural disinfectant, and here, can shine light on any stuck patterns of relating.  The eclipse is at 8:06 AM EDT.

Libra is the sign of knowing who we are, from being with another.  With the Aries deck stacked with a stellium (Sun, Mercury and Uranus), it’s an eclipse that has an electric zapping effect.

It could be time for a wild truth or atmosphere of excitement, with Mercury and its higher octave (Uranus) ready to trumpet the new.  This might unsettle established grooves of relating, especially if they’ve become “old hat.”

Those with cardinal sign energies at 9 to 19 degrees are touching the live wire of transformational relationships here.

Eclipses Before the Autumnal Equinox

This is a very special New Moon for cleaning up, and getting back to the wholesome essentials.  The eclipse is exact at 2:42 AM EDT.

Virgo relates to the harvest, and now we have startling insights about separating the wheat from the chaff.  To lift out the treasure from the obfuscating mess and info overload, is a critical practice of our times.

There could be revelations about what’s needed to feel better, and prevent disease.  Those with mutable energies from 15 to 25 degrees get the jolt of eclipse-inspired shape shifting.

This Full Moon activates the urge to simply be who you really are.  Aries tips the scales toward action, which has its own magic.  The eclipse is exact at 10:51 PM EDT.

Some relationships could be unsettled, with change and growth spurts.  The demand to be true, is pulsing as strong as the desire to be in harmonious sync with another.  That makes for drama that could lead to break-ups, or to new love pacts that make room for who you’re both becoming.

Cardinal signs (0 to 9) get the most cosmic juice, so look for these points or planets in your birth chart.